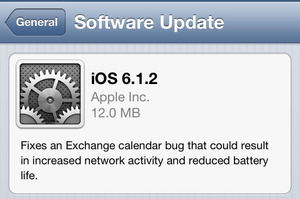 Apple has released iOS 6.1.2 for iPhones, iPads and iPod touch to fix a couple of bugs reported in iOS 6.1.

It had previously released iOS 6.1.1 just for iPhone 4S users to fix problems with 3G signal, after several carriers told their customers not to update to iOS 6.1 due to several reported issues.

Now Apple has pushed out iOS 6.1.2 for all compatible devices, fixing an issue with Microsoft Exchange servers that caused headaches for corporate network administrators, and also fixing another issue that reportedly caused battery drain.

What is more peculiar is what Apple has not fixed however; iOS 6.1.2 is still vulnerable to a flaw that lets a user easily bypass the lock screen and access some user data, so we guess that we have to wait for Apple to fix that now too.

iOS 6.1.2 is available OTA, or through iTunes, for all compatible devices now.

Netflix still accounts for one third of all U.S. Internet traffic
Microsoft begins migrating users away from Hotmail and towards Outlook