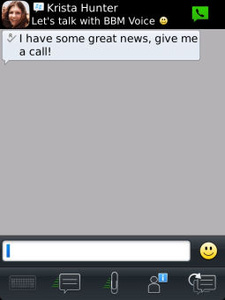 BlackBerry has confirmed that its popular BlackBerry Messenger – or BBM – will be available for users of Android and iOS devices this summer.

BBM will be supported on iOS 6 and Android 4.0, or later. It marks a change in BlackBerry’s services strategy, where once BBM was a major drawing factor of BlackBerry devices. Now, with so many former customers using iOS or Android devices, the company is willing to open it up to other platforms allowing those lost customers to keep in touch with their old BBM contacts.

“For BlackBerry, messaging and collaboration are inseparable from the mobile experience, and the time is definitely right for BBM to become a multi-platform mobile service. BBM has always been one of the most engaging services for BlackBerry customers, enabling them to easily connect while maintaining a valued level of personal privacy. We’re excited to offer iOS and Android users the possibility to join the BBM community,” said Andrew Bocking, Executive Vice President, Software Product Management and Ecosystem, at BlackBerry.

BBM has more than 60 million monthly active customers, with more than 51 million people using BBM an average of 90 minutes per day. BBM customers collectively send and receive more than 10 billion messages each day, almost half of which are read within 20 seconds of being received.

BBM’s move to iOS and Android relies on approval from Apple’s App Store and Google Play.