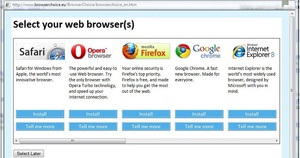 The European Commission has once again fined software giant Microsoft over failing to comply with its commitment to give users a chance to choose their default browser when purchasing a new PC.

Microsoft has been hit with the 561 million euro ($730 million) fine for what it has called a “technical error” within its Windows 7 OS.

In 2009, the company agreed to present a web browser choice screen to all users in the European Economic Area (EEA) in order to settle a competition investigation, in which the European Commission outlined its preliminary view that the company abused its dominant position in the market for client PC operating systems through the tying of Internet Explorer to Windows.

The Browser Choice screen is an unbiased browser selection program that allowed a user to install an alternative web browser, or stick with Internet Explorer as a default. However, Microsoft failed to roll out the browser choice screen with its Windows 7 Service Pack 1, which was released in February 2011, meaning millions of users were not given the choice to move away from Internet Explorer. As expected, the European Commission was not happy.

Microsoft, for its part, did not make any excuses and will not appeal the ruling:

We take full responsibility for the technical error that caused this problem and have apologized for it. We provided the Commission with a complete and candid assessment of the situation, and we have taken steps to strengthen our software development and other processes to help avoid this mistake – or anything similar – in the future.

Twitter: 8.5 percent of all active accounts are automated
“Canada’s cell phone market is dysfunctional and in desperate need of an...

Google killing off Google Reader, Internet goes up in arms
Scroll to top