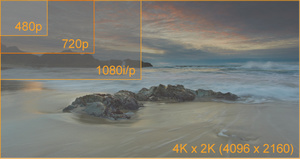 The company is committed to the standard, despite its large bandwidth needs.

Hunt says streaming will be the first arena for 4K, rather than in disc form: “That’s because of the challenges involved in upgrading broadcast technologies and the fact that it isn’t anticipated within the Blu-ray disc standard. Clearly, we have much work to do with the compression and decode capability, but we expect to be delivering 4K within a year or two with at least some movies.”

The exec also notes that House of Cards, the company’s original show starring Kevin Spacey, is filmed in 4K.

GE sells rest of NBCU to Comcast for $16.7 billion