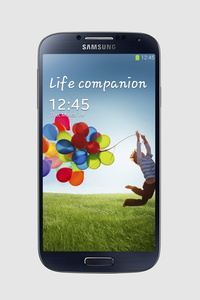 Samsung unveiled its highly-anticipated flagship, the Galaxy S4, during a long and extremely strange event in NYC tonight.

While there was little announced that had not already been leaked in the past few weeks, the company’s latest includes a number of very innovate new features including eye tracking.

From a design standpoint, the phone looks almost identical to the Galaxy S III, except with a larger screen.

As expected, the phone has a 5-inch 1080p super AMOLED display with 441ppi. The screen is also protected by Corning’s latest Gorilla Glass 3 and can be used with gloves thanks to “mitten tech.” Under the hood the phone is powered by a Samsung Exynos 5 (international) or Qualcomm Snapdragon S4 Pro (North America), has 2GB RAM, 16-64GB of internal storage, a microSD slot, a removable 2600 mAh battery, 100 Mbps Cat 3 LTE, Bluetooth 4.0 and 802.11ac Wi-Fi. The device also has an IR blaster, turning it into a full remote control. The device is a thin 7.9mm.

The rear camera is 13-megapixel camera while the front camera is 2-megapixels. One feature Samsung touted was its “Dual Camera” mode, which allows you to take shots with the front and back at the same time and then integrate both into a single scene.

Samsung says the phone will launch with Android 4.2.2, with the company’s own TouchWiz UX overlay. A few of the highly touted eye-tracking features include “Smart Pause,” which pauses video you are watching when you look away (resuming when you look back) and “Smart Scroll,” which allows you to move through your emails or a web page just through your eye movements.

Adding to the plethora of new features, Samsung showed off S Voice Drive (voice commands while driving), Optical Reader (an OCR scanner for business cards including actions such as translation), WatchOn (for turning the phone into a live guide for TV viewing), and S Health (a full fitness tracker).

Starting next month, the phone will be available on 327 mobile operators. There was no word on price.

Android 4.3 will be a minimal update