According to the latest IDC report, the global PC market will decline for the second straight year.

While it forecasted slight growth for 2013 last year, the research firm was forced to reverse its original prediction due to a number of factors including slowing growth in emerging markets.

For 2013, the firm expects PC shipments to decline by 1.3 percent to 345.8 million units. Last year the market contracted by 3.7 percent. Desktops will be the biggest losers, seeing a 4.2 percent decline for the year. IDC predicts desktop sales will continue to fall at least until 2017.

Loren Loverde, VP of IDC’s Worldwide PC Trackers group, says customers have not been wowed by new models, and competition from tablets and high-end smartphones continue to crush demand.

“Growth in emerging regions has slowed considerably, and we continue to see constrained PC demand as buyers favor other devices for their mobility and convenience features,” says Loverde.

Additionally, the firm has somewhat soured on Windows 8 and its potential to boost the market. 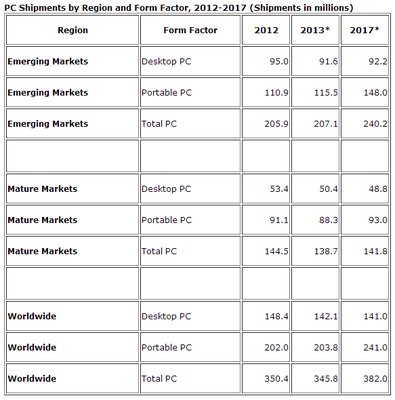 Netflix still accounts for one third of all U.S. Internet traffic